After five epic years in Brisbane, beer and music lovers can rejoice as the Beer InCider Experience lands in Melbourne for one day only on Saturday 2 March 2019. Beer InCider will bring with it a stacked lineup of Australia’s best independent breweries and cideries, food trucks, pop up restaurants and an absolutely stellar music line up that will have you questioning whether it’s a beer festival with awesome music or a music festival with awesome beer. We say both!

DMA'S, Something for Kate, Alex the Astronaut, WAAX, West Thebarton and Loser

Beer InCider will feature hundreds of beers and ciders including our limited release brews, our infamous Ping Pong Arena powered by Gage Roads Brewing Co (for showing off your mad Berlin-style ping pong skills), games, activations and a Wine & Cocktail Bar for the unconverted. Beer lovers may also find themselves getting an edu-brew-cation at the Brewers Stage with lively Q&As and general chit-chat with the who’s who of the beer biz.

All tickets include a 2019 Festival Program, reusable 320mL festival cup and FREE public transport to and from the festival.

Beer InCider is an 18+ only event. 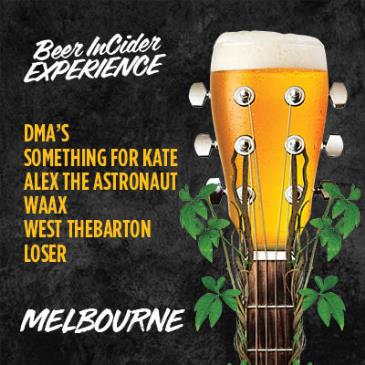