Processing...
Tickets
This show has sold out. More tickets may become available. To go on the standby list please email [email protected]

MAN ABOUT THE HOUSE II

Following a sell out season in 2016, Tim Ross and Kit Warhurst are thrilled to be part of the Anywhere Theatre Festival to perform their brand new show.

For the last four years they have taken temporary possession of Architecturally significant buildings and skillfully blended storytelling, music and design in a mood breaking form at that has seen them literally sell out houses across the globe.

Following rave reviews for the recent film series, Streets of Your Town, Tim and Kit welcome you to three unique properties on the Sunshine Coast as part of this unique festival.

“Must see show of the Festival.”  New York Times.

“Had us in stitches.”  Sunday Times (UK)

“With quick wit and telling anecdotes, Tim shares his passion for modern design and architecture — the fortunate audience is left both enlightened and entertained.”  Wendy Kaplan  Department Head and Curator Los Angeles County Museum of Art

With only one show in each amazing house, tickets are extremely limited, book now to avoid missing out.

The show runs for one hour and 35 minutes with a short interval.

The Marcus Beach House (1985) by Brisbane Architect Craig Herron derives from the architect designed, craftsman built Australian suburban project homes of the sixties and seventies. Designed for his mother, the house entertained family holidays for the extended Heron family for more than 25 years. The house was sympathetically re-modeled in 2010 for its new owners, a young family of five, by the multi-award winning Brisbane Architect Paul Owen (Owen Architecture). At just 140sq.m the courtyard house layout derives efficiency of space through integration of circulation and utility functions bringing family members together in daily routine and ritual. A restrained architectural aesthetic, the Marcus Beach House gives primacy to function and demonstrates small houses done well deliver eminently liveable family homes. 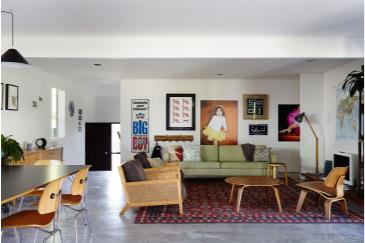