Newer Volcanics is a live performance of original songs by The Orbweavers in collaboration with The Letter String Quartet, with atmospheric visuals and production design by filmmaker Brian Cohen.

Newer Volcanics refers to a geological province in south-east Australia. It includes the country south west of Narrm (Melbourne), the sovereign lands of the Wathaurong, Wurundjeri and Boon Wurrung people of the Kulin Nation. A landscape characterised by water courses carved through ancient volcanic plains, silty clays, estuarine sediments, and low lying tidal salt marshes of abundant birdlife, where creeks and rivers meet the sea.Much of the land in the inner-west of Melbourne city has been has been paved and overlaid through the impacts of colonisation and industrialisation. The waterways and their immediate surrounds persist in industrialised areas, a living thread of the past and the present, a continuing flow and force through time.Newer Volcanics responds to the volcanic plains and waterways of western Melbourne, reflecting on geology, industrial history and environmental change. Travelling from the confluence of the Maribyrnong and Birrarung (Yarra) Rivers through to the former saltworks and lagoons of Skeleton Creek, Altona, Newer Volcanics offers a limbic interpretation of landscape through songs and visuals.Presented by Melbourne Knowledge Week - City of Melbourne.

The development of Newer Volcanics has been supported by State Library of Victoria through a creative fellowship, Creative Victoria, and Australia Council for the Arts.

Melbourne Knowledge Week is committed to reducing its impact on the environment and will be certified carbon neutral for 2019.

This means we will measure the festival’s carbon emissions and implement actions to reduce them. Then we will purchase offsets on your behalf to cover the remaining emissions and achieve carbon neutrality.

Your contribution will go towards a range of offset projects including a reforestation project in NSW and a project which enables Aboriginal communities to reduce emissions through improved land management practices in the Kimberley. 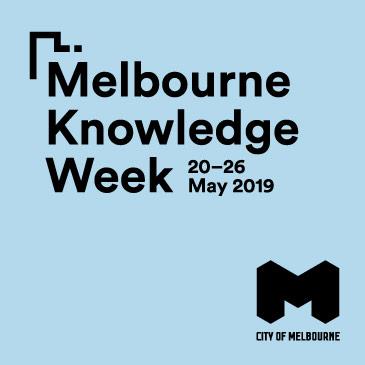